Growing up in a very Irish Catholic family, my Irish roots were always celebrated. Thus, when I learned about the Celtic notion of horror vacui in my Legend of Arthur class, I was quite intrigued with this concept that my ancestors might have been influenced by or practiced. From Latin, horror vacui means “fear of empty space,” and it is used to describe certain kinds of art over the course of history that would suffocate every space of canvas with patterns, designs, or images. It has been used to describe arabesque Islamic art, interior design during the Victorian era, and finally, Celtic medieval art such as the Book of Kells. Although the connection to Celtic art was what initially caught my attention about this artistic practice, I found this overarching idea very intriguing and something I wanted to explore within my own work.
On both a physical and conceptual level I was drawn to this idea of “the fear of empty space.” My artistic practice and body of work up to this point could largely be categorized as demonstrating horror vacui, as I naturally tend to fill every space of my canvases with exciting colors, energetic patterns, and inventive shapes. Conceptually, I was even more interested in this idea as part of the problem of growing up in our culture: we fear empty space. If our culture is the blank canvas, then the materialism, social media oversharing, and constant need for attention or competition that we live amidst are the Celtic patterns or arabesques covering up our fear of the reality of what might exist in the “emptiness” that lies all around us. In my work and by exploring my own horror vacui, I have found, however, that these empty spaces are not to be feared; they are where the peace amidst the chaos resides, where one can go to rest and make sense of all that is happening around them.
This fear of empty space is something I recognize from my own experience of growing up in a busy, hectic sphere as one of five kids, in schools that demand involvement and achievements in every activity, and in a culture and generation that glorifies things such as materialism and social media celebrity. Thus, in my paintings, I am working through my past and memories in order to find the empty spaces in my own life, places and moments where I was able to find peace and meaning in all that was happening around me. While trying to excavate these empty spaces from my life, I found that they were in fact some of the richest memories I have and greatest moments of personal growth. They were the moments where I learned to be confident amidst the whirlwind of expectations, the moments of realizing the beauty of occasional loneliness, and the moments of finding fulfillment within rather than from all the “stuff” and things around me.
Initially, I thought that in my work I would find that the “empty” areas of rest had to be completely segregated from the chaos, depicted with serene colors, and unassuming in their presentation. The further I delved into my paintings, however, I had to accept a key fact of life that is imperative to realize before one can find space in today’s world: the chaos is unavoidable. Within my paintings, I initially tried to scrape the chaos away with my palette knife or cover it up with large portions of pastels, but I ultimately realized that finding space is not about running away from challenges that overwhelm us; rather, it is about locating it in the face of it all—amidst the excess around us. Thus, my paintings strive to merge these elements of peace and inundation.
My work is mainly influenced by expressionism and abstract expressionism as a means to evoke emotional responses. I was also influenced by other styles and movements such as graffiti and kids’ art as a way to tap into the emotional side of growing up, cubism and architectural elements as a way to create and destroy space, and fauvism as a way to explore color’s relationship with emotion. Within every painting are multiple contrasting devices such as areas of lightness vs. darkness, overwhelmingly saturated color vs. muddy broken colors, areas filled with lots of forms vs. large areas of solid paint, very thick paint vs. thin drippy paint, and so on. Although my work is largely about contrasts, through compositional balance unifying such a variety of stylistic components, I reconcile the inundated and empty spaces. Through the variety and balance of styles, forms, contrasts, and content within my work, I am celebrating the dynamism and beauty of growing up in our hyperactive, fast-paced world while pushing back against it, sifting through the chaos in order to find the space to rest, grow, breathe, and learn how to just be in. 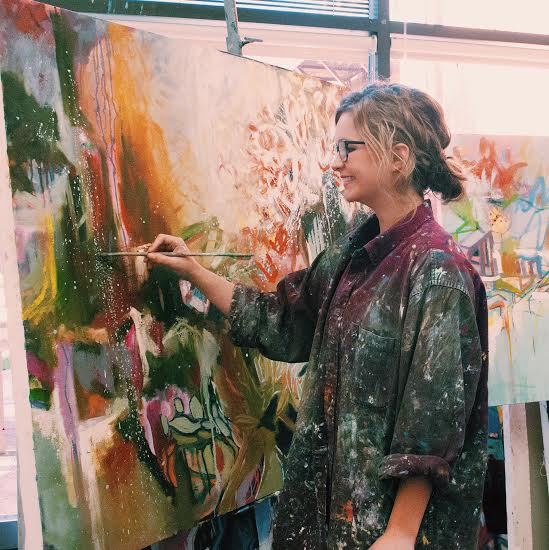 Erin Tapp is a senior Studio Art and English double major and Art History minor from Atlanta, GA.  As a student, she received the Presidential Scholarship for the Visual Arts and the Eleanor Layfield Davis Scholarship.  Her interest in the arts, which was furthered by her study abroad experience in Florence, has led her to both curatorial and design internships at the Atlanta Contemporary Art Center, the START Gallery, and the design company, Bradley USA. She has participated in numerous exhibitions at the START Gallery and Hanes Gallery.