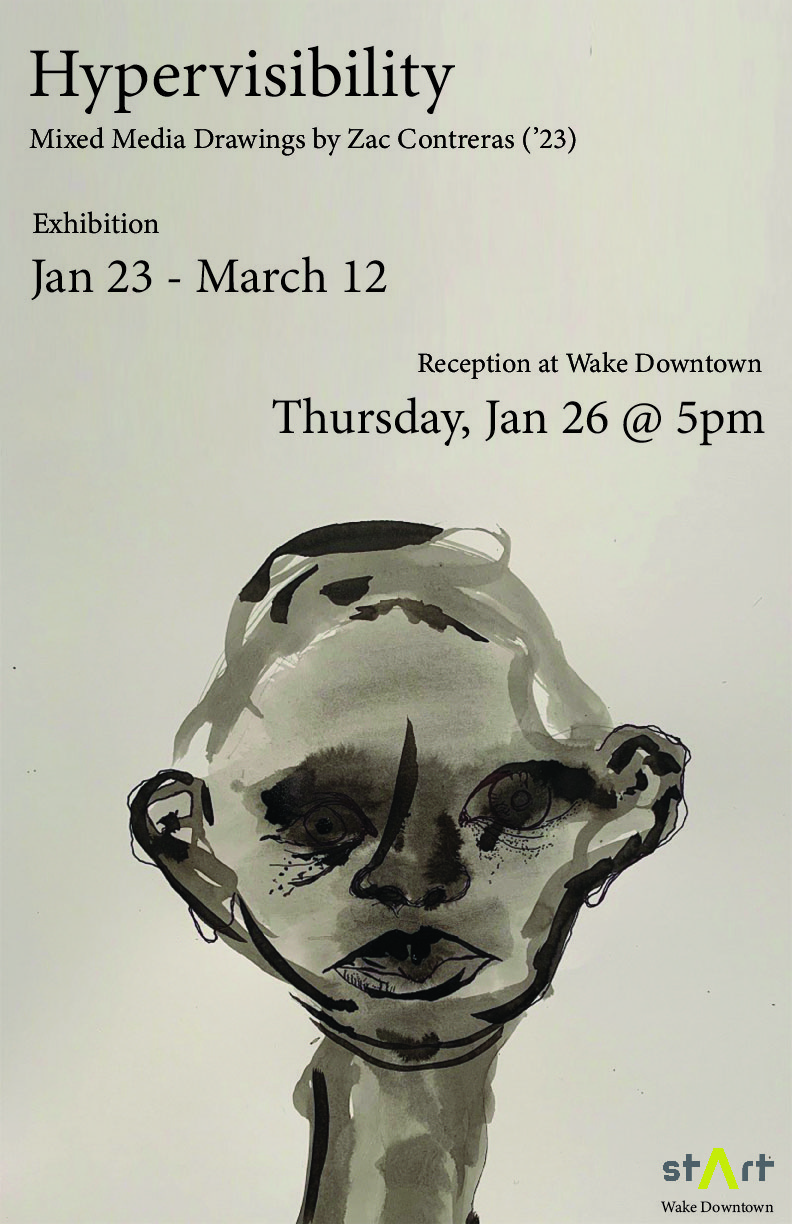 “My work is characterized by portraiture, specifically depictions of human-like figures in vibrant colors, black and white, or a combination of the two. I am interested in exploring how personal understanding of body image is influenced by sociocultural factors such as sexuality, demographics (ethnicity, race, and gender), social class, and religion. Under this overarching theme, I am particularly concerned with the concepts of androgyny and body dysmorphia. I am fascinated by the performance of the body, meaning the tension between lived experiences, external perceptions, and internal existence within the body. The expression of self is determined both by personal identity and external environment. Much like viewers at a museum can look at the same painting and focus on different aspects of the work, each person we interact with perceives us differently. The several versions of yourself which exist in the minds of the people you know are constantly being subjected to their internal biases, preconceptions, and positionalities.”

“People who exist at the intersection of several identities experience an increased interest in their visual appearance and scrutiny of their identity by (often white) observers in the dominant culture. This interest manifests in questions about the subject’s origin, race, ethnicity and other determinants of individual identity. Further, the subject is expected to conform to the stereotypical traits associated with the identities they inhabit. Antonia Rigaud describes performative artist Adrian Piper’s work as the formation of  “social contracts binding artist and audiences together in the definition of the self.” The description of identity art as the formation of a contract alludes to body performativity. The conflict between a true self and a public self are central to my work. From David Hammons’ reinterpretation of self in his Body Print series to Frida Kahlo’s self-portraits exaggerating her stereotypically masculine features, these artists are able to reclaim their individual bodies through making conscious and deliberate decisions on how to present themselves. In this same way, I am able to warp, oppose, and shape the social world in which my portraits exist: a reality that is everything but fixed. With race, ethnicity, and gender being social constructs, society’s beauty standards have long shaped personal understandings of self and the body. There may come a moment when identity labels seem to become more limiting than liberating. My work is situated at a moment of tension, where the subject chooses to defy expectations.”

“I aim to challenge dominating conceptions of beauty through an exaggeration and distortion of body features. These amplifications of difference and moments of divergence further encapsulate the conflict between selves. My work ranges from realistic depictions of the human body to abstract and suggested gestures. My current project, Hypervisibility, aims to highlight the unique experience of being perceived in society. I incorporate my own experiences as a Mexican-American and the experiences of others I’ve spoken to who find themselves thrown into spaces with predominantly white, homogenous observers. Glass Eyes and How do you see me? pay homage to the vibrant colors of my culture, while simultaneously refusing machismo through suggested femininity. My exhibition centers around five life sized, ink wash paintings on butcher paper. The Reflections series forces the viewer to confront unfamiliar and towering figures that are on the cusp of being human. How do we react to unconventional depictions of beauty that are free from societal restrictions? Can we even fathom a world in which these restrictions cease to exist? As I developed my exhibit and chose which works to include, my focus remained on the human experience through the body. I use a variety of mediums, but the one I turn to most frequently is ink. I enjoy the freedom and the movement this medium allows, as well as the mistakes it encourages. My goal is for the audience to confront these works head on, to see a reflection of themselves or something entirely different. Most importantly, I hope the viewer is pushed to rethink what it means to be seen (and not).”