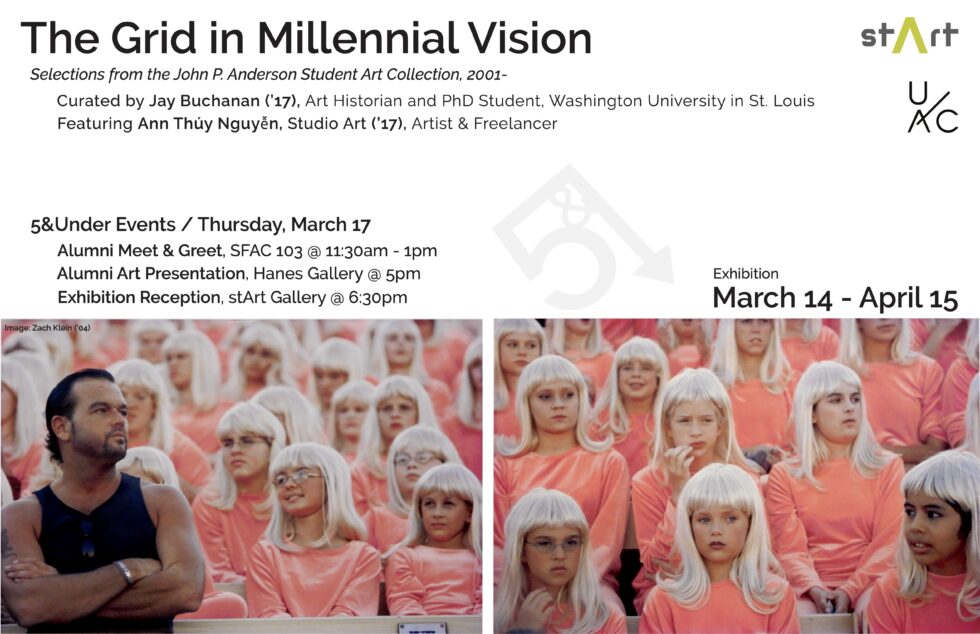 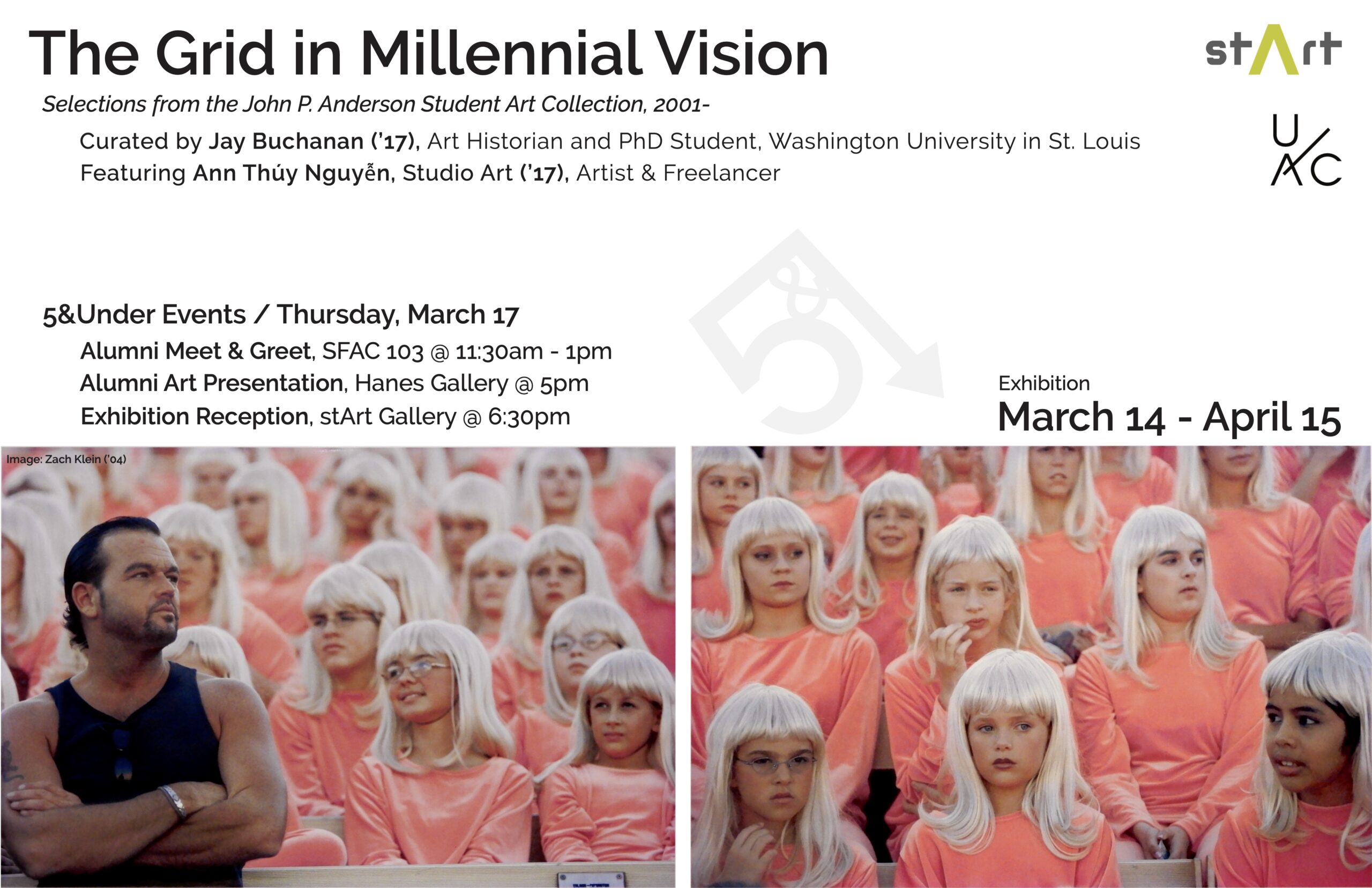 stArt’s annual 5&Under program invites Wake Forest alumni who have graduated within the last five years to engage with current students about their transition after graduation into art-connected careers.

This year stArt is pleased to welcome back Jay Buchanan (’17) and Ann Thúy Nguyễn (’17).

On Thursday, March 17th, at 11:30am in Scales 103, we will be having an “Office Hours” Meet & Greet with Jay and Ann, providing students an intimate opportunity to speak to our our visiting alums. Later that evening at 5pm in the Hanes Gallery, both Jay and Ann will give brief talks about their experiences post-Wake, followed by a reception at stArt gallery at 6:30pm in the presence of the exhibition, The Grid in Millenial Vision, curated by Jay Buchanan with selections from the WFU John P. Anderson Student Art Collection.

My obsession with grids emerged in Dr. Lisa Ashe’s “Art since 1945,” a survey of modern and contemporary art I took in Fall 2016. In her class we learned about abstraction, expansion, repetition, and standardization as key attributes of global modernism. We read Rosalind Krauss’s “Grids” (1979) and looked at Warhol’s soup cans. My taste immediately favored the order and seeming simplicity of the grid, even as I raise a skeptical eyebrow at some artists’ supposition that the grid (and geometric abstraction more broadly) might depopulate their art of political realities and demonstrate the “autonomy” of the art object.

Later that fall I directed a production of Patrick Marber’s Closer, an “in-yer-face” play about intimacy and sexual politics. The grid informed the production’s rectilinear design and staging. Caroline LeDuc (’19) performed in the role of Alice. Her Exercise (Spinal Grid) (2019) appears in this exhibition, and traces LeDuc’s incorporation of the View Points, a theatrical method we used in rehearsal, in her painting and installation practice. Several View Points exercises call on the grid to strategically limit the “movement vocabulary” of theater practitioners and “liberate” their physicality.

Many people come into consciousness about the systems that structure social existence in college. In 2016 I became conscious of the grid everywhere. Grids make written language possible. Grids facilitate graphing, powering mathematic and scientific inquiry. Grids offer foundations to design, structuring thought for architects, accountants, and industrialists alike. Textiles rely upon gridded structure. Screens comprise grids at the pixelate scale; cities, with variation, at civic scale. Power and transit systems operating at the infrastructural scale aren’t colloquially known as “grids” for nothing. The news grid structures the flow of information across communications networks. Grids make maps, which take center stage in selections by Katherine Robinson (‘09) and Marcus Keely (‘10). Grids facilitate play and games; they also plot electoral districts, and the hierarchies of many institutions that shape daily experience. The recurrence of the grid in the history of representation readily crosses lines of culture and medium.

The selections in The Grid in Millennial Vision mark student artists’ use of the grid in the process of making sense. The works mark accessions to the Anderson Collection from 2001 to present, spotlighting the grid as it manifests in the personal and artistic development of “millennials” (if such generational categories exist). Some selections place the grid in conversation with the construction of identity; untitled work by freelancer and 5&Under featured Studio Art alumna Ann Thúy Nguyễn (‘17), for instance, engages the grid as an instrument of bias as in the history of Kodak color film. In works by 18 artists, the grid refracts the geometries of urban life, supports and scrutinizes surveillance regimes, challenges cultures of body shame, and leans headlong into abstraction. The Grid in Millennial Vision includes works by Kayla Amador (’19), Mitchell Anderson (’07), William L. Brown, Erin Cassidy (‘12), Minori Egashira (’14), Max Gordon (’18), Keonna Hendrick (‘05), Bentrice Jusu (’13), Marcus Keely (’10), Zach Klein (‘04), Caroline LeDuc (’19), Iris Liu (‘22), Ann Thúy Nguyễn (’17), David Reidel, Katherine Robinson (’09), Brandon Rus (‘14), Megan Scheminske (’04), and Robyn Washington (‘03).