“Where are you from?” A question benign as any other on the surface, but one that carries with it implications and assumptions that have always caused me to take pause. This question, posed to most people, typically prompts a response of a hometown or state. But my replies of “Charlotte, North Carolina,” never seemed to satisfy, and would be met with a look of skepticism, polite smile, and tilt of the head, as if indicating a joke I did not feel a part of. “No, but where are you from? What are you?”

I felt, on the inside, white. American. I spoke and dressed no differently than any of my peers, and had spent the entirety of my childhood in the West. But my face told a different story, provoked the affected tone in the many “where are you from” I received.

This question, I know, is prompted by my face, which displays the features that mark race. My inherited almond-shaped eyes, black hair, and high cheek bones will forever mislabel me as Chinese, Japanese…or Vietnamese? Korean?

Why, I wondered, does being considered American imply becoming, to some degree, white? And if whiteness is an indication of American national identity, many Americans, second generation immigrants like myself, will forever exist in cultural limbo, never truly belonging to the countries from which they hail, but never quiet American enough to be truly American.

In this exhibit, I  explore the “whitening” effects that assimilation into American culture requests of non-white Americans.

The faces in this project are all faces who have been met with this question – children of immigrant parents, or immigrants themselves who have come here at an early age. I use video projection to physically project “American identity” onto them – the colors of the American flag: red, white and blue. The colors mix and merge, but against the backdrop of a white flag, they become a part of it only when their faces are painted white to match the background.

I reference the flag, the unifying banner of nationality, and consider the Pledge of Allegiance – a mantra uttered by school children at the start of each school day, a ritual of patriotism repeated with unquestioned frequency. Examining the semiotics of the individual phrases of the pledge was a means of exploration. I chose to write and rewrite the pledge, exploring its meaning through repetition, while breaking down the parts of the whole.  Between each inscription I “whitewash” the text, building a rich surface textured by my process that breaks down and obscures meaning from the pledge.

In this show, I explore conceptions of American identity and its connotations in relation to whiteness. I present the consequences of cultural erasure  and create a multi sensory experience for the viewer through audio and video site specific installation. Through sound collage, projected video installations, and experimental painting I create a space that mimics the confusion and tension of liminality, a space that is neither native nor foreign, a space that is home to many but that neither nation will claim. 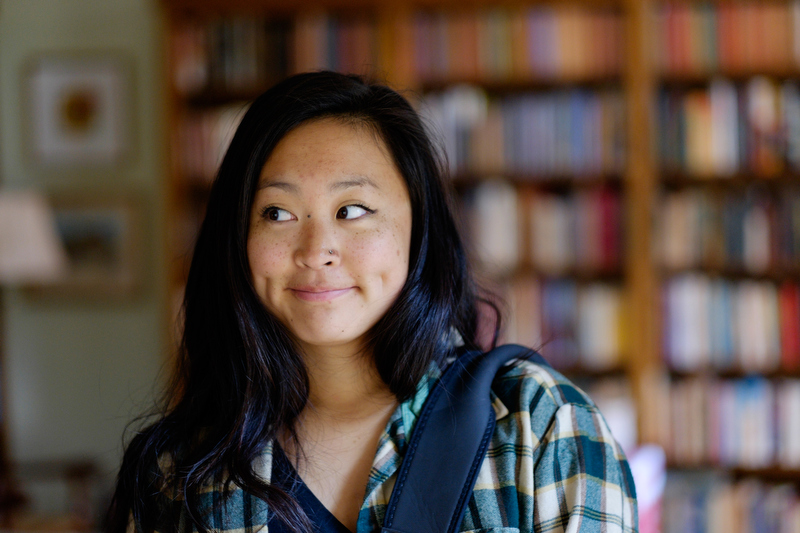 Kristi is a painter, photographer, and amateur filmmaker based in North Carolina, and will graduate this year from Wake Forest University with a B.A. in Studio Art. Born in 1993 to Malaysian immigrants in Calgary, Alberta, Canada, her unique cultural background has sparked an interest in other cultures and a passion for connecting people and ideas. She has traveled extensively shooting humanitarian, landscape and adventure photography, and spent the summer of 2014 in Nepal working on an independent film funded by the ACCIAC grant. Her work has been featured in several shows at the START Gallery and Charlotte and Phillips Hanes Gallery in Winston-Salem, as well as at a warehouse installation exhibit at 505 Baity Street. Her short film Gordon was featured in Local Color, an online art blog and was awarded the Hane’s Gallery Purchase Award in 2014, to be included in John P. Anderson Permanent Collection at Wake Forest. Her poetry, painting, and photography have been featured in the literary and arts publications 3 to 4 Ounces.