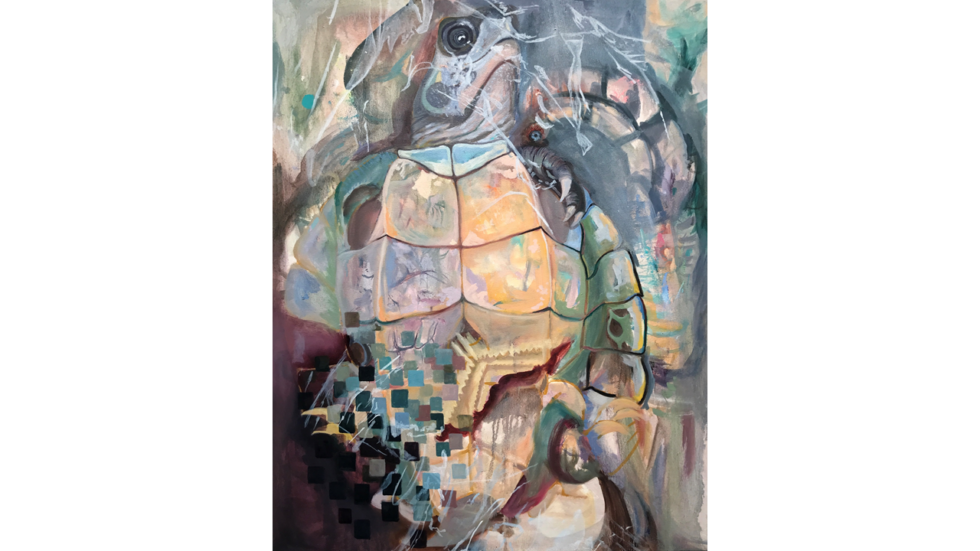 Over the past three years I have explored the intersection of art and science, specifically how biological properties can influence and inform artwork and how that artwork can be used to spread awareness and potentially and consequently inspire change. My fascination with biology underlies a profound recognition of the complexities of the current climate crisis, the further investigation of which has led me to become interested in the ways that critically endangered species are being impacted by human driven global warming and the important role every species plays in the web of interactions that forms Earth’s ecosystem. This series of paintings is evidence of a culmination of the growth in my ability to convey conceptual information and my technical capacity to generate effective visual statements.

While I began my art journey by creating very detailed, hyper-realistic works, I have grown more comfortable with creating ambitious, larger and more abstract pieces and wrestling with challenging topics. The Red List is titled after the International Union for Conservation of Nature’s Red List which is the world’s largest repository of information regarding critically endangered species. The Red List includes paintings about nine species that were selected on the basis of their Critically Endangered status and currently decreasing population size. Through this series, I investigate the elements that make our natural world so awe-inspiring. The way the paint and solvent is layered on the canvas mimics the generation and growth of cells and organisms and the time and energy it takes for a living being to take form. The incomplete imagery intertwined with traces of shadow and light mirrors the cycle of regeneration and destruction that is recurring in nature. Loose, thin areas neighbor thick, structured, well-rendered forms, creating depth and complexity in the resulting painting.

The broken color palettes that dictate each of the paintings were chosen to create a visual experience that is similar to being immersed in nature. There are biological and natural elements combined with invented, abstract forms that reflect my personal response and confusion while I grapple with this complex topic. Some forms are recognizable and allow the viewer a glimpse of familiarity, but the balance of line and abstract form create confusion about whether the imagery is dissipating or being constructed, whether these species will fall extinct or, with human intervention, thrive once again at some point in the future. The abstract nature of the work, the broken colors, and the light and shadows allow for the beauty of nature to be conveyed with a melancholic undertone that hopefully allows the viewer to consider their emotions and thoughts regarding the current climate crisis and its impact on so many now critically endangered species.

Christina Molkenthin is a senior Studio Art and Biology double major from Darien, CT. Christina has exhibited works in the stArt Gallery in Reynolda Village as well as in downtown Winston-Salem and was a recipient of both the Eleanor Layfield Davis Art Scholarship and the Reifler Family Scholarship during her time at Wake Forest University. She also was recently named a semi-finalist for a Fulbright award for her art research proposal related to climate change and endangered species. Christina had the opportunity to serve as the Program Assistant for WFU’s “Contemporary Art and the Venice Biennale” seminar and also interned at Save Venice Inc., a non-profit that organizes and funds projects to restore and preserve artwork from cultural heritage sites, in Venice, Italy. Christina is excited to continue her artistic journey and climate change awareness initiatives while she prepares to apply to medical schools this spring.